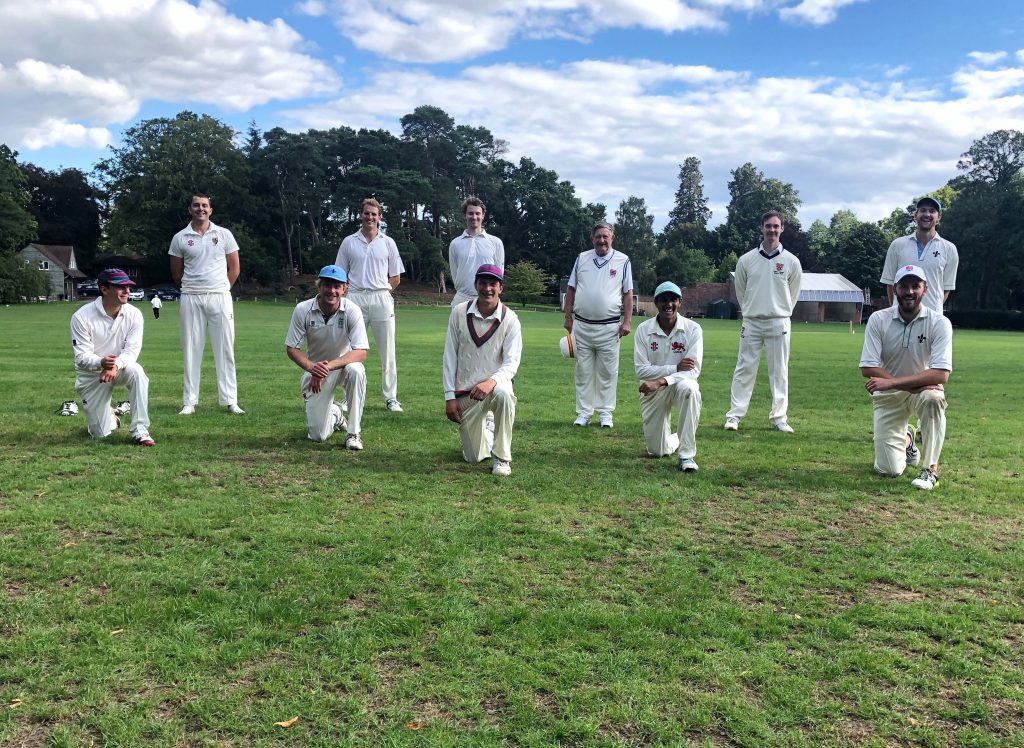 Having been denied the chance to run this long standing fixture earlier in the year the two teams were raring to play in this early September game. The subtle change in time of year was unfamiliar to those who’d played Gemini previously, used to seeing the likes of Ramblers submitted to the Sunningdale school matron from heat stroke. The weather led to a wicket which promised a fair contest between bat and ball.

After multiple elbow-to-elbow greetings, a coin toss and some throw downs we were underway. Senaratne and Barlow ma set off to bat as they had done nearly 10 years prior, in their last house tie. Some excellent line and length came interspersed amongst the occasional low flyer from Leon and Wilson of the opposition. The patient batting soon found us accruing runs at only a marginally faster rate than we were accruing wickets. Notably precise hands from Gemini meant we found ourselves at 36-4, 36-5 then 36-6. A glass of wine was taken over to the groundsman and a provisional request for a ‘Plan B’ of back-to-back twenty-twenties was postulated.

However, the mighty Barlow mi and Maxwell managed to find their feet and stabilise the ship. The determination, timing and strength from each of this pair, not only saw the ball escape the grounds of Sunningdale school on several occasions but also producing six upon six upon six… as in fact Barlow mi managed to achieve in three consecutive balls. This persistent front against the Gemini bowling attack led to both Barlow mi and Maxwell securing more than 50 runs apiece and transforming the scoreboard. As with those who came before this pair, those who came after were unable to add anything significant to the total and we found ourselves all out for 150 off 33 overs.

After a short break and some socially distanced picnics, the Ramblers took to the field with Brown and Barlow utilizing the new ball. Bowling from the railway end, Brown took an early wicket with clever hands from Whitmore – still the only Rambler to have his activities at Under 13 level recorded on CricketArchive – in the covers. With some convincing powerful strokes from George Thomason it was decided to move some of our best fielders to the dangerously close boundaries as we saw ball after ball escape the field. We denied ourselves a number of endings to this one man campaign as Thomason sought to capitalise on most bowling we gave him.  It wasn’t until late on, that we secured two more wickets with Russell-Pavier’s bowling down the hill, but Thomason remained.

The last over was predictable – with 10 to win Horne grabbed the ball to try to continue his sequence of a wicket for the Ramblers every year since his 70th birthday. Standen-MacDougall’s eyes lit up and the first ball was duly despatched into the Fives Court – a fate which was generally expected for his second. However furious scorecard activity showed that Thomason – lately a beak at Eton now esconced at Sunningdale – was on 97. Time for plan B – Standen-Macdougall pinched a single – a fitter mid off might have caught it – and all was set for the coup de grace. Horne threw one up as invitingly as ever and Thomason stuck it straight at long on. Somewhat predictably six resulted; exit a very contented Thomason and a slightly less so Horne

Te assembled personnel adjourned to the Gemini Arms, swapped Sunningdale stories and all looked forward to returning next year.