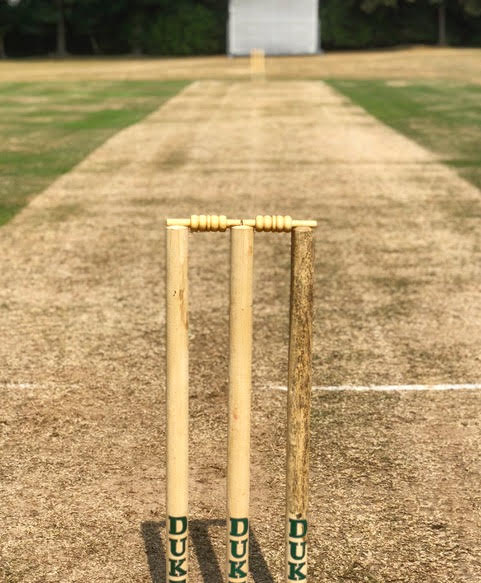 With the temperature creeping up through the late 20°Cs play got underway with the opening Gemini batsmen taking to the crease. To open the bowling the debut combination of Barlow and Brown was trialled. The scene was set. The pitch provided a lot of entertainment with an uncertain bounce. The 6 ft 5 plus bowling attack made full advantage of the extra bounce bamboozling the batsmen at every opportunity. However, the batsman remained sharp and pounced on anything short and the boundaries came right from the off. An earlier wicket from Brown re-settled the balance. Opportunities in the air came and went. The field did well and battled through both the boiling heat and stray objects in the field; labradors and trees inside the boundary. After an hour of play, the same batsmen were in and, the temperature had exceeded 30°C. Joe Lewis (Malvernian son in law of Gemini co founder Tim Dawson) proceeded, as is his usual wont, to dispatch our bowlers to distances far beyond the pitch boundary and had soon made a century. A few quick wickets again came from Brown craftily finding a way through the batsmen’s defences. After a brilliant lunch in the headmaster’s house, where we lost a Rambler (Priest) to heatstroke, play resumed. The introduction of spin of Charlie Steel gave the seamers a welcomed break. The change of pace gave the game a new dynamic while our guest bowler Sam Norrington showed real passion in his support of the Rambler campaign. Wickets for them both came but  Lewis went on and was on 163 not out when Gemini declared at 269-7.

The Ramblers were keen to get going right away. After a roll of the wicket R Elston and T James took to the crease. Batsmen chose to swap additional batting protection for cooler attire. After a ball was headed to mid-wicket by (Dr) Elston after a high bounce and a head injury examination was carried out and redundant protection was re-installed. A valiant effort held out for the first 25 runs. But the wise and seasoned Gemini bowling attack found holes in the Rambler batting line up. They continued to add pressure. The Ramblers soon found themselves with less than 50 runs for more than 5 wickets. It wasn’t until another display of cricketing skill from Brown came that any significant runs (38) were made. He showed us the way to play on this strip was to hit hard and use the short boundaries to do the damage. Next,  there was a surprising re-appearance of Priest from his heatstroke recovery annex in the headmaster’s house. He soon became the batting’s last hope. However, another excellent ball from F.Hobby dismissed him too. The Ramblers found themselves all done and bowled out for 88 and in time to catch the football World Cup penalty shout out between Spain and Russia in the Gemini Arms.