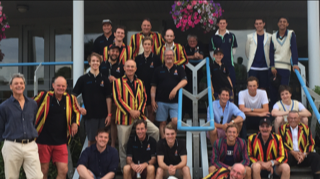 After wining the toss on a glorious afternoon at Upper Club, the Ramblers elected to bat first and make use of what looked to be a good wicket. Hardman and Farley opened the innings and got Eton off to the perfect start. Hardman, in particular, looked to be in majestic touch, flicking through midwicket and sweeping his way to an elegant 63. Indeed, at 88-0 off 10 overs, the Ramblers looked set for a large total. However, when Hardman fell to the spin of Burgess and was followed shortly after by Doughty, IZ Australia had checked the early Rambler progress. Farley and Whipple began to rebuild the innings, but shortly after, Farley was caught off the bowling of Hodge for 52 and the Ramblers had slumped to 120-3.  A subdued period ensued in the middle overs as Whipple (13) and Dalrymple (23) built a platform from which the Ramblers could accelerate at the end of the innings. When Whipple and Dalrymple fell, Gus Kennedy and Rambler President, Michael Brooks, did just that, giving the Ramblers the impetus required for a strong finish. Kennedy struck an impressive 45 not out, leaving Eton 227-5 off their 40 overs.

Ellison and Whipple opened the Rambler bowling, with Ellison making the early breakthrough, removing Horne (9). The Ramblers turned to off spin shortly after, with Fox and Mathur into the attack. Whilst Fox was loose, Mathur was excellent, coupling flight and guile with great accuracy. He removed Hodge (35) and Lovell (32) in his eight over spell before succumbing to a groin injury. IZ Australia kindly provided a substitute fielder and, an over or so later, a second was required as Doughty was forced off with a lip injury with the 2018 leavers, aka ‘generation snowflake’, unable to take any further part in the game(!) Taylor and Dalrymple entered the attack and helped to contain the IZ batsmen, but with the dangerous Bryant and Van der Merwe now well set, this was a tricky task. Not even four overs from Gus Kennedy’s golden arm could stop the IZ Australia onslaught as their numbers 4 and 5 pushed on towards victory. A late flurry of wickets threatened to spark an unlikely turnaround for the Ramblers, but Issaka (27*) took his side over the line, IZ winning by 4 wickets.